The Holy Temple
The Miraculous Icon of Archangel Michael 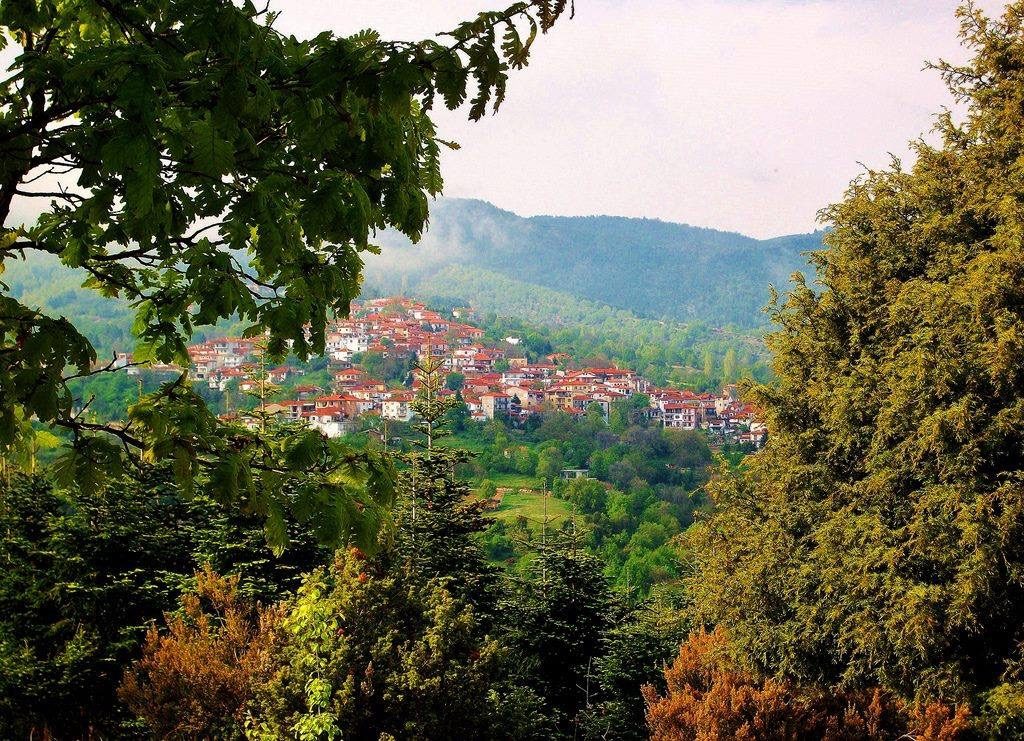 The village Taksiarhis is built in the “aprons” (plagies), on the mountain of Holomonta, which has height 1.165 metres.
The older name of village was “Loukovi” or’ “Lokovi” which changed in 1928 in “Taksiarhis”, in honour of the Protector of our Brigadier Michael to whom is also honoured the “Catholic”, the central Holy Temple (church) of our village.

The tradition reports that the region was part of the Holy Monastery Dohiariou of Holy Mountain, which is dedicated in the Archangels.

Ruins in various regions of Holomontamountain testify that enough settlements existed which were linked together and as a result the current village was created.

Our Holy Temple, cruciated with “troulo”, is built on older Temple of royal rythm, on which Turkish people put fire and was restored in 1914. Our new Temple began to build in 1970 and was finished in 1977. Not only is remarkable the few time in which the construction lasted but also the voluntarily help, except from the financial help of residents for its construction! The Temple is entirely built with Stone from the Holomonta mountain.

The Miraculous Icon of Archangel Michael is situated in the place that local people name “Throne”, in the left part in the church. It is a very old Byzantine icon, whose chronology is not known to us.

Because of the damages that created the Turks in their failed effort to burn it, and at which the Icon was miraculously saved and found by the residents at their return from the Holy Mountain in which they had resorted in order to be saved by the fury of Turks, the residents placed silver “shirt” in the Archangel, and new face, both of which were made in Russia, (for this reason the face is of Russian way of drawing). In the down part of the “shirt” exists a sign that says: “Miraculous Icon of Archangel Michael”, which is dated in 1872. For this reason many persons from Chalkidiki and generally from the North part of Greece come to our Church faithfully and “they greet” the Icon of Archangel and deposit on him their problems and sorrow.

In the place for women upstairs on the second floor of our Holy Temple exists a small Ecclesiastical Museum with Icons, Utensils and Books that are approximately dated in the 18th century.

In the ground out of the Temple there are other four buildings: the “Hotel”, a building that has three floors, which was built in 1912-1916, and is now restored, “Kellia”, which were built in 1960, in which at the beginning lived pilgrims, then became a place for making candles, cheese dairy, ossuary and now are used as rooms that cover the needs of our village. There still exists an old (restored) Chapel of Saint Theodoros of Tyronos, (pre 1800) as well as modern “Proskynitari” made of bricks from craftsmen of our village.

In Taksiarhis seven Chapels still exist, scattered around the village, the four of which were built in the end of 1800 (Saint Christoforos (1873), Saint Nikolaos, Prophet Ilias (1887), Saint Paraskevi, Saint Panteleimonas (built in 1890, repaired in 1916), Saint Paraskevi and Virgin Mary the Gorgoepikoos, which are contemporary.

Except the big festival of our Holy Temple, it deserves to mention also the other festively celebrated events which are:
A) The festival of chapels (in four of them: Saint Panteleimonas, Saint Paraskevi, Saint Nikolaos (“Anakomidi” of Holy Relic, “20 May” and Saint Christoforos where the traditional “Kourmpani” “offer of food” takes place)
B) The Feast “The miracle of Archangel Michael” (6 September) and C) “The Icons”. It is the “Perifora” of Holy Icons that takes place the third day of Easter.

In the cultural events of Taksiarhis the Feast of Mushroom is also included because mushrooms are referred as one of the best dishes in our village. The Feast usually takes place in September.

It deserves to be mentioned that the unique agriculture on the mountain of Holomonta, which can survive at these winter conditions of low temperature, is the agriculture of Christmas trees, which are planted by seed in our fields, (WE DO NOT CUT THEM FROM THE FOREST) and after almost fifteen years and more, we sell them at Christmas (75% of Greek agriculture of those trees come from Taksiarhis).
There is even a modern unit of treatment of herbs and therapeutic plants, such as tea ecc. that are collected, drained and sold. Modern units of groups of rented rooms and restaurants, which are made with particular attention and care, have been developed in the last decade so as the needs of the visitors of our village and Holomonta to be covered.

Finally we also mark the traditional sweets and drinks which are made by the women of our village, with materials that usually come from fruits of the forest in order to strengthen the income of their families.

We wish that God and Archangel Michael will help and protect you and your families.

Please, use this contact form to get in touch. We will be glad to answer you.